Preserving the legend of Serafix
in the breeding of Morabs.

SAX Morabs is a small show/breeding operation located in central Kentucky. It is located in what is called the “Heartland” of Kentucky, 50 miles south of Louisville, 90 miles west of Lexington and 50 miles north of Bowling Green. The Morab breeding program revolves around the Arabian bloodlines of *Serafix. It is the goal of SAX Morabs to preserve the legend of *Serafix in the breeding of Morabs.

My interest in Morabs all began in Wisconsin when my sister-in-law, Sue, bred her beautiful Crabbet-bred Arabian mare to two different Morgans in the early 1980’s.

I had always wanted a horse, knew nothing about them and was determined to learn all that I could. I purchased the 4 month old Morab colt from Sue, whom I named El Serniga, in the fall of 1984. El Serniga and I were to commence on a long venture of horse ownership and fun. Read about our early beginnings together in “Labor of Love”.

My in-laws had moved to Kentucky in 1970, so it was only natural that we would gradually ‘gravitate’ to horse country. Sue moved in the mid 1980’s and my husband and I moved in 1990 leaving our nest of grown children in Wisconsin. Once in Kentucky, I leased Sue’s Crabbet mare and foaled two more Morab colts, full brothers, in the early 1990’s. One of colts, Star Fire, was a blood bay, 14.1 H and due to his short stature I gelded him. Star Fire was successfully shown huntseat in the Class A circuit as a Half-Arabian and won many first places. He later was sold and has become a mount for handicapped children. The other full brother, Star King (photo), was a tall, handsome, chestnut flaxen stallion and at age 4 was lost to a tragedy Christmas of 1998. This ended the era of Morab offspring out of Sue’s Crabbet mare. 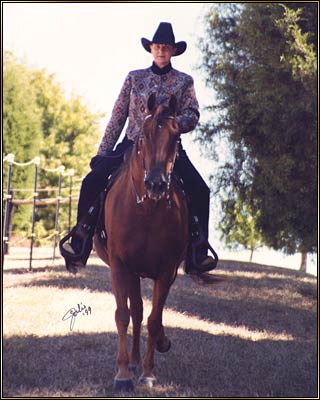 "Riding Down the Isle" - El Serniga

SAX Morabs had not really become an entity until the year 2000. The 1990’s were solidifying as to what direction I wanted to take in the breeding of Morabs. Whether it was fascinating or intriguing to me, the history of *Serafix as a leading breeding sire, of his time, was something I had wanted to pursue ever since I owned El Serniga. I read about John Rogers and his search, purchase and importation of *Serafix. I have a high degree of respect for John Rogers breeding program. He studied Arabians, he quickly found which Arabian mare bloodlines nick with *Serafix. He felt conformation and performance was more important than the dish of the face. He was very successful. I had decided to capture *Serafix bloodlines for my Morab breeding program.

My goal was to acquire an Arabian mare with considerable *Serafix blood. Fate favored me and I got a lead on SX Starfix, a bay mare foaled June 1994, who was a double *Serafix granddaughter! (SX Staley’s Gemini x SX La Quinta) Along with this purchase, I got her half sister (whom I later sold), Quintessential (Promotion x La Quinta), a bay mare foaled July 1988. SX Starfix and Quintessential came to Sonora, KY fall of 1998.

SAX Morabs was to become a reality and was born May 2000. Time moves on and with that SAX Morabs relocated to Stamping Ground, KY fall 2012.

A Labor of Love

I had always wanted a horse and had waited till I was nearly 40 years old to own one. Our family was living in the country west of Milwaukee in Wisconsin.

The Morab breed was unknown to me until I purchased my sister-in-law’s second and last breeding of her Crabbet-bred Arabian mare to Morgan stallions in Wisconsin. Sue had a filly, a one-year-old, and a 4-month-old colt when I was ready to purchase in the fall of 1984. I had not ‘shopped’ around nor knew what I wanted. I just told my sister-in-law I would buy the colt. She had three requests. Name him after his Arabian sires, * Serafix and Niga, geld him and show him. 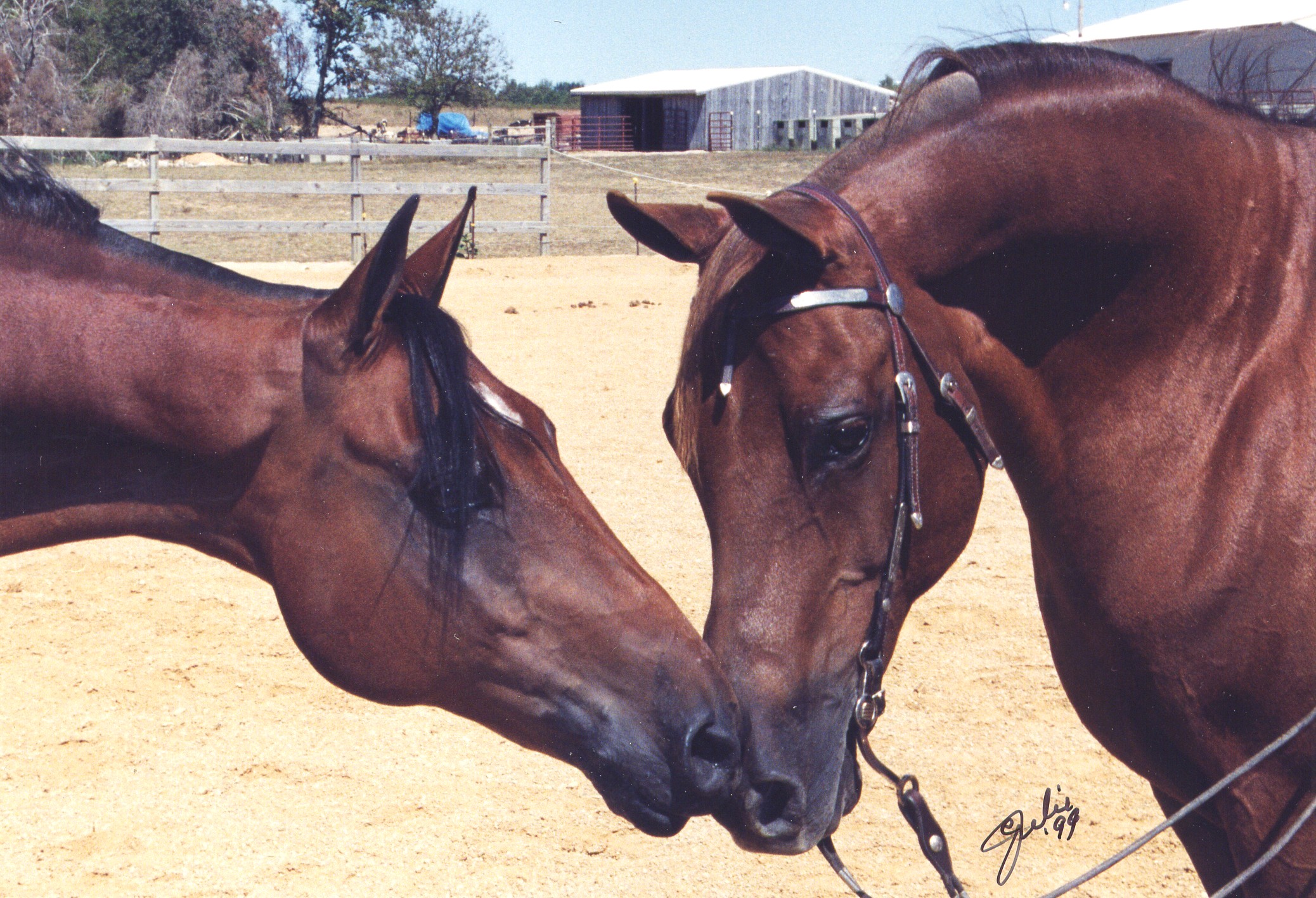 My son, Mike (then eleven years old), and I started with my new four-month-old weanling in the fall of 1984. We were already in 4-H, so we joined the horse project group. We would learn as El Serniga would grow and we would adapt to ownership over time. Mike spent a lot of time the first winter standing in the paddock and letting a very scared colt (who went from living in a herd to only him) get to know him. Our skills increased over time through 4-H, a lot of reading, and help from friends and trainers. Mike successfully showed in showmanship when El Serniga was a yearling at the county 4-H shows in addition to open shows. Mike, eager to ride, hopped on 18-month-old Serniga one day. Serniga accepted this as matter-of-fact. A five-year-old party quest rode three-year-old Serniga bareback with only a hackamore. His gentleness with people belies his rambunctious youth and ‘growing-up’ injuries.

As a youngster, El Serniga, or Big Red, a name given to him by Jean, the wife of Tony Larscheidt of Suffix, WI., grew to be 15.2 hands and a solid copper chestnut. As Serniga got older, he became a ‘mousy’ brown and now in his 20’s is becoming a chocolate brown. He is exceptionally muscular yet handsome horse. The best part about him is that when I am on his back, I know I have a horse underneath me! He was eager to learn and wanted to please. He is very ‘socially’ inclined as well. He has to know what is going on around him and is always begging for a pat from anyone coming into his barn. Serniga would also ‘supervise’ any work my husband would do in his ‘living quarters’. The extra detailed supervision was not always appreciated by my husband. Serniga unfortunately has the capacity to ‘fall in love’ and becomes attached to other horses. Though he is the ‘herd boss’, he causes no injuries and ‘brought up’ all 3 of my Morab stallions (two of which were half-brothers, I no longer have). I can put a mare and foal in his pasture with no problem. He ‘babysat’ my 1993 Morab colt while his dam was off in another part of the pasture. However, when it comes time for one of these ‘babies’ to leave or any other horse for that matter, Serniga’s ‘heartache’ is something to behold.

It was fun and challenging showing El Serniga as a mother and son team effort back in the 1980’s. The best part of this experience was that all three of us ‘grew up’ together. I would show him in halter classes and Mike would show him in showmanship classes for Serniga’s first three years. It was not easy for Mike to ‘wait’ to do serious riding. Serniga had beginning training at age three at Tony Larscheidt’s. At the same time, Mike and I took riding lessons together. When Serniga was four and a half, he went for more serious training and when he returned home we had become more skilled at ground schooling. When Serniga was four years old we started his driving experience and trail riding, which Mike really enjoyed. Mike and Serniga won a blue at the local county 4-H in Showmanship and earned a trip to The Wisconsin State 4-H Horse Show in 1989.